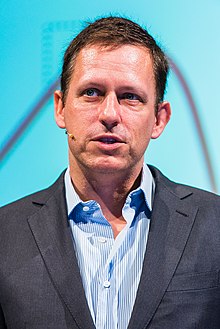 Date of Birth: 1967 in Frankfurt, Germany

I no longer believe that freedom and democracy are compatible. – (Cato Unbound)

This is always a problem with elites, they’re always skewed in an optimistic direction. -( The New Yorker)

Thiel has contributed significant sums over the past 3 American presidential elections including: $3.9 million to Endorse Liberty, whose purpose was to promote Texas congressman Ron Paul for president in 2012, a $1.25 million donation in support of Donald Trump’s Presidential campaign, as well as donations to Mitt Romney and John McCain.

Thiel has supported gay rights causes such as the American Foundation for Equal Rights and GOProud. In 2010, Tiel held Homocon 2010 for GOProud, an LGBT conservative/libertarian organization, in his New York City apartment. Tiel himself is gay. He invited conservative columnist Ann Coulter, who is a friend of his, to Homocon 2010 as a guest speaker. Coulter later dedicated her new book, Demonic: How the Liberal Mob Is Endangering America, to Tiel. In 2012, Tiel donated $10,000 to Minnesotans United for All Families, in order to fight Minnesota Amendment 1.

In July 2012, Tiel made a $1 million donation to the Club for Growth, a fiscally conservative 501(c)4, becoming the group’s largest contributor.

Thiel made a $1 million donation to NumbersUSA, an anti-immigrant group

Motivated to sue Gawker after they published a 2007 article discussing his sexuality; in May 2016, Thiel confirmed in an interview with The New York Times that he had paid $10 million in legal expenses to finance several lawsuits brought by others, including a lawsuit by Terry Bollea (“Hulk Hogan”) against Gawker Media for invasion of privacy, intentional infliction of emotional distress, and infringement of privacy rights after Gawker made public sections of a sex tape of Bollea with a married woman. The jury awarded Bollea $140 million. Gawker announced it was permanently shutting its doors due to the lawsuit in August 2016. Thiel referred to his financial support of Bollea’s case as “one of my greater philanthropic things that I’ve done.”

Newspapers are asking for government assistance as the ailing industry struggles to overcome plummet [...]

Fueled by “dark money,” cash-flush liberal groups with ties to the Democratic Party are mobilizing t [...]

Powerful companies and trade groups asked for over $2.7 trillion in government assistance. The coron [...]

With restaurants and bars across the country closed or limited to takeout service, the industry has [...]

There are signs that an already crippled economy may get even worse. Investment bank Goldman Sachs e [...]

"This is the fastest move in history from an all-time high to a bear market," one finance [...]

Companies with 500 or fewer workers that have been hurt by the pandemic are eligible for loans to co [...]

Defense Production Act Has Been Used Routinely, but Not With Coronavirus
1 April 2020 - Zolan Kanno-Youngs and Ana Swanson

The Defense Production Act has been invoked hundreds of thousands of times in the Trump years. But w [...]

The two companies are the latest targets of labor action by groups fearing virus exposure on the job [...]

A proposal to retroactively lift a limit on state and local tax deductions would largely funnel mone [...]

Furloughs by Macy’s and Gap will affect the majority of their work forces, and show how the pandemic [...]

Corporations are saving cash, cutting costs and refinancing debt to manage the economic fallout of t [...]