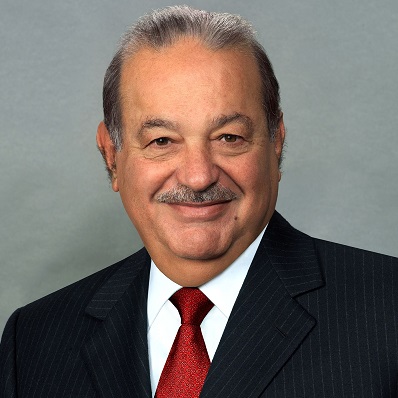 In His Own Words:
I think a businessman must stick to his business and his community, and stay away from political interests, projects, and agendas. I’m not a member of any political party nor do I ever care to become one.

You don’t need to raise taxes on the rich people.
(The World’s Richest Man: Carlos Slim in his Own Words)

Opinion Shaping:
Being the richest man in his country gives Slim a great influence over the opinions of the people, through his actions, words, and economic ability. However, he does not openly support any political party.

Also, Carlos Slim owns 16.8% of shares of The New York Times, making him the largest shareholder, however, there is no evidence to show that Slim has any influence over the US new source.

Carlos Slim and the US Election:
Donald Trump’s Quotes on Slim:
“Certainly a very rich Mexican owns a big chunk of the paper and has a lot of power over the paper.”
“The largest shareholder is Carlos Slim. He comes from Mexico. He has given many millions to the Clintons. Reporters of the New York Times, they’re not journalists, they’re a corporate lobbyist for Carlos Slim and Hillary Clinton.”

These quotes come from Trump’s argument in blaming Carlos Slim for the New York Times’s article exposing Trump’s sexual harassment remarks. Carlos Slim’s spokesperson replied that Slim had no influence over the content of the NYTs and that the investment was purely financial and there is no evidence to back up Trump’s claim. Slim took a stance against Trump as he scraped a potential TV project that was in the works with Donald Trump in June 2016. Furthermore, in an interview about the US elections, Slim said that Donald Trump’s economic proposals would crush the US economy. (See below for relationship with The Clinton Foundation)

Fundación del Centro Histórico de la Ciudad de México A.C. organized by Carlos Slim and Jacobo Zabludowsky to revitalize and rescue Mexico City’s historic downtown area to enable more people to live, work and find entertainment there.[19] He has been Chair of the Council for the Restoration of the Historic Downtown of Mexico City since 2001.

Slim’s Stake in Tobacco vs ICSS Controversy
Slim’s organization, ICSS or the Instituto Carlos Slim de la Salud, is arguably the largest organization for the promotion of health and care in Latin America. Slim and his family also own 20% of shares form Cigarrea La Tabacalera Mexicana (Cigatam), which is the greatest cigarette distributor in Latin America and he was on the Board of Philip Morris (which is a branch of Cigatam).
ICSS devotes $500,000 towards health initiatives, fighting non-communicable diseases. ICSS’s states their purpose is to ‘prioritize work on emerging diseases, such as heart disease, cancer, and other chronic and degenerative diseases, as well as challenges due to the globalization of health risks.” The risks of smoking are only mentioned in the section of “Healthy Life” very briefly and with little emphasis, even though in 2010 37% of the male population smoked. ICSS is the largest Latin American NGO for health and it neglecting education on the risks of smoking, which is one of the top health risks for the population. These facts raise the question: Is there a tie between the fact that the head of the organization has major stakes in the tobacco industry and his health NGO neglects a focus on the dangers of tobacco?

Slim and the Clinton Foundation:
Slim has donated $100 million to the Clinton Initiative project which has provided 50,000 cataract surgeries in Peru. He has also given a $20 million fund to strengthen small and medium-sized businesses in Colombia and provided the funds for a digital education program for youth in Mexico. He has traveled around Latin America with Bill Clinton, visiting such projects.

Carlos Slim and the Obama Phone:

The United States ‘LifeLine’ program started in 2012, better known as the ‘Obamaphone’ program, distributed cellphones to low-income families in need. The program bought these cell phones for about $10 a piece from the company TracFone, of which Carlos Slim is the largest shareholder. Many criticized Obama for this decision, as it allowed Slim to “make make a lot off a government program aimed at helping poor Americans“.

In the most conservative House district in the country, agricultural interests and President Trump [...]

Alabama's GOP Senate primary has become a test of power for President Trump, as his endorsee is [...]

Four months before Election Day, House Democrats are building on their immense fundraising lead over [...]

Are indoor dining delays the final straw for restaurants?
11 July 2020

"Anybody that thinks that outdoor dining is a solution needs to have their head examined," [...]

The company said the necklaces were meant to symbolize "spirituality and good fortune." [...]

The Twitter co-founder's donation will help fund a group of guaranteed income pilot programs in [...]

Julian Castro was among many to tweet his disapproval of Goya, urging consumers to "think twice [...]

Britain Offers a Plan for Jobs, but Braces for a Wave of Layoffs
10 July 2020 - Eshe Nelson

The government says it will spend nearly a billion dollars on work coaches and a new online job sear [...]

Early hopes for a quick rebound from the pandemic have yielded to worries about its long-term impact [...]

As unemployment claims keep pouring in, new job postings are lacking, and an end to some benefits is [...]

Businesses that want to use the Federal Reserve’s Main Street program cannot, and many that can use [...]

The airline warned workers that they could lose their jobs because demand for travel remains weak an [...]